We are in for what is shaping up to be a tumultuous second half of 2022.

Things were already getting heated at the beginning of the year, when the tailing off of the pandemic was followed swiftly by rises in inflation and higher interest rates as the economy seemed to bounce back. Then another ‘black swan’ event came into view, as Russian tanks massed on the Ukrainian border in March.

As a result, the large hike in inflation that the most pessimistic pundits thought might, possibly, occur towards the end of 2022 arrived early, and the cost of living has been going through the roof as we have been caught in a pincer movement of rocketing energy bills and rising retail prices.

I find the need to repeat the figures to fully digest the enormity of the hikes that are coming down the track. The larger of the two hits to income is obviously going to come from fuel.

In effect, average energy bills will have risen by just under £1,000 in the space of a year.

On top of this, of course, consumers will have to contend with retail price rises that are going to have a similarly large impact on their wallets.

The UK’s retail price index is now running 11 per cent ahead of w. it was this time last year, meaning that the weekly shop and other staples are going to make a big dent on disposable incomes.

The Bank of England might be predicting that inflation will peak and start to come down some time in late 2023, but it goes without saying that in the meantime wages are not going to keep up with this level of inflation.

On the plus side of the equation, we have the government’s recently announced energy grant of £400 per household (with those on means-tested benefits receiving more), which is going to take the edge off energy costs for many.

However, we should not lose sight of the fact that t. will remain, even after this handout, a large number of income earners who are going to take a considerable hit to their wallets when energy bills hit the doormat.

Graphs show that this is going to impact those households on lower incomes far greater than those on higher. Add housing costs (mortgage, rent and council tax) into the mix of those households in the bottom 10% whose total annual disposable income is £13,550 (after tax and National Insurance) and t. won’t be an awful lot left. 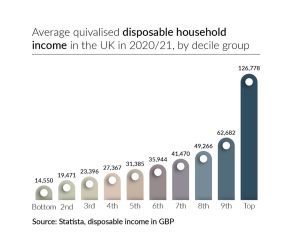 It hardly goes without saying that this has the potential to subject lending decision-making to a considerable level of stress testing.

Borrowers with untarnished credit histories may suddenly find themselves unable to keep up loan payments as their disposable income shrinks, while prospective clients who would previously present as low risk, may be anything but.

In such an environment, lenders will have to be extremely vigilant when managing their loan books and making new lending decisions. While sales teams are given the opportunity to shine during the good times, it is in times such as these that the quality of the back office is truly tested. It can mean the life or death of profit margin.

Expertise and systems that usually work fine during economic upturns are put to the test when t. is a downturn and can come up short. Reliance on systems that are overly dependent on what is essentially partial or historic data are not going to be up to the complex changes that the economy and individuals are going to experience. Underwriting teams will have to contend with sudden changes to personal circumstances.

This will equally apply to commercial lending. Sectors that fared well pre-Covid, such as entertainment and hospitality, may struggle as discretionary spend shrinks in response to unavoidable expenses. As with individuals, businesses may suddenly find themselves unable to meet financial commitments as a result of static or shrinking income.

Ideally, lenders want to be able to recalibrate their scorecards and appetite for risk on an almost daily basis as the lending environment changes. They also want spot-on affordability assessments with the applications that come in.

Thankfully, this is now possible thanks to the technological advances that have taken place since the last downturn. W., in the past, timely, high-quality data was virtually unobtainable, today fintech suppliers such as LendingMetrics have made it easily accessible, and in an instant.